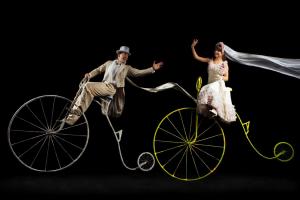 Antología is a superb show mixing illusion with sheer theatricality that is performed at the Black Light Theatre Srnec in Old Prague. The city of Prague and this voiceless theatre company have become synonymous with this form of theatrical presentation because it pioneered the style over the course of the twentieth century. Indeed, the company first brought the non-verbal theatrical genre to the public's attention at the 1961 Edinburgh International Festival. Antología, which might be best translated into English as “Anthology”, is a combination of the company's most successful performances over recent years and represents a kind of 'best of' series of mini-shows. For fans of black light theatre or newcomers to it, the show offers a great deal of entertainment that can be followed easily no matter what Czech language skills are possessed by audience members.

Combining elements of mime, magic, dance and comedy, Antología is staged on an almost daily basis at the splendid Baroque Savarin Palace, the ideal place to take in a theatrical production in comfort. The show consists of eight scenes which include many spell-binding moments, such as the flying bicycle section, in which audiences are treated to a seemingly impossible on-stage illusion. There again, there are comedic touches, too, such as watching what happens to underwear when its owners are not there to keep it under wraps!

Founded by Jiří Srnec, the Black Light Theatre Srnec is a remarkable company of experts in their field which offer touches of pathos, humour and dramatic tension throughout their shows. The company has been widely praised internationally. In 2002, it was selected to represent Czech culture during a NATO summit that was being held in Prague. The company has performed in Las Vegas, New York and all over Europe, South America and Asia. Successfully transferring to many territories across the globe due to the lack of verbal communication, Antología is an ideal show to see in Prague for tourists and locals, alike.