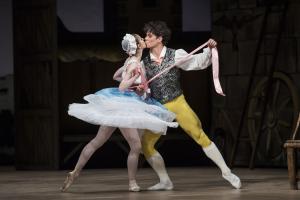 La Fille mal gardée (or The Wayward Daughter) is funny, bold, endearing, and moving all at once. The early Romantic score by Louis Joseph Ferdinand Hérold, adapted and arranged for the dance stage by John Lanchbery, and the expressive choreography by Sir Frederick Ashton combine in a thoroughly entertaining and impactful performance. The ballet classic is coming to Prague this season!

The origins of La Fille mal gardée go back to 1789 when Jean Dauberval produced a ballet of the same name. The Romantic composer and early opera comique master Ferdinand Hérold found the story inspiring and came up with his own score in 1828. Hérold's music, in turn, inspired famed British ballet dancer and choreographer Sir Frederick Ashton to work on a completely new choreography for the popular dance comedy.

Royal Opera House composer John Lanchbery was tasked with re-arranging the original score to better suit the choreographer's vision. Ashton's staging La Fille mal gardée premiered on 28 January 1960 at the Royal Ballet of London, and it became an instant classic on the global ballet scene. As part of an acclaimed reign over many world stages, Ashton, Lanchbery, and Hérold's La Fille mal gardée will take you on a fun comedy trip in Prague.

The plot is a classic love story. Lise and Colas are in love, but the Widow Simone has other plans for Lise. She wants the young woman to marry the dull but rich Alain and does her best to keep Lise and Colas apart. After many comical and fantastic ordeals that prove how ill-suited Alain is for Lise, the Widow Simone manages to arrange a marriage ceremony in the presence of a notary.

To Alain and his father Thomas's surprise, however, Lise emerges in her wedding dress and with Colas by her side. Enraged, the groom's father tears up the marriage contract and storms out. Lise and Colas then plead for Widow Simone's blessing of their union, and she finally lets up. Love wins again!

La Fille mal gardée is a pastoral love story, brought to life by the musical talents of Hérold and Lanchbery and elevated further by Ashton's demanding, elaborate choreography. It is a joy for the senses and a deservedly admired ballet classic that every fan of the genre should see.