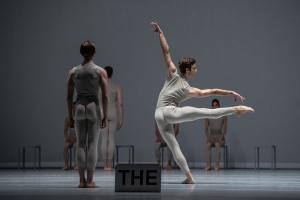 The State Opera in Prague celebrates three giants of contemporary dance with a triple threat of signature modern ballet performances. Forsythe / Clug / McGregor includes three master choreographers’ impressive and innovative pieces that showcase their unique styles and their knack for combining various art forms into avantgarde stage performances that are sure to leave a lasting impression.

‘The Second Detail’ by William Forsythe opens the night with powerful dynamics and lots of percussive gusto. The musical backing, the work of Dutch composer Thom Willems, is heavy on percussion instruments that readily shift tempos and throw the dancing bodies into outlandish and challenging rhythms. Forsythe’s signature blend of choreography, visuality, and sound is on full display in this classic, which he originally produced for the National Ballet of Canada and debuted in Toronto on 20 February 1991.

Edward Clug’s ‘Handman’ comes next to continue the percussive theme. ‘Piano and Drums’ by Milko Lazar and ‘Dismissed; Drums and Drone’ by Justin Hurwitz move the modern ballet performance forward at a rapid pace. Clug’s choreography was nominated for the highly sought-after Benois de la Danse award. The work originally premiered at the Nederlands Dans Theatre on 18 February 2016 and has been in high demand on the modern ballet circuit ever since.

Wayne McGregor ups the ante with the evening’s closing performance ‘Eden | Eden’. The award-winning British choreographer has built a name as a multimedia innovator and a multichannel storyteller who sculpts each ballet performance out of carefully curated video, audio, and live elements. In this particular work McGregor explores the relationship between modern technology and the timeless aesthetics of our outer and inner worlds. The musical accompaniment is ‘Dolly’ from Steve Reich and Beryl Korot’s Three Tales, a digital video opera in three acts. ‘Eden | Eden’ first unfolded in all its wonderful complexity on the stage of Stuttgart’s Staatstheater on 7 April 2005.

Together, Forsythe / Clug / McGregor paint a colourful and exciting picture of all the places contemporary ballet can go. Prague’s historical State Opera opens its doors to modernity yet again.