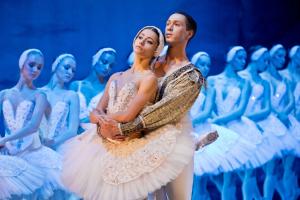 Swan Lake has grown into a timeless piece of classical music and dance, a fate that its uneventful premiere on 4 March 1877 at the Bolshoi Theatre in Moscow certainly did not predict. It was the first work in this genre by Russian Romantic composer Piotr Ilyich Tchaikovsky. According to the critics, his score was too elaborate, too bombastic and too complex for the ballet form. Ironically, these are some of the characteristics audiences around the globe have come to love about Swan Lake. Hybernia Theatre in Prague revives the beloved dance work this season with a recording of Tchaikovsky’s inspired music and a choreography that will transport you into the magical kingdom from step one!

The storyline of Swan Lake hails from a fusion of European folk tales. Its lead female character is Odette, a princess turned into a beautiful white swan by the curse of the evil magician Baron Von Rothbart. Together with the Baron’s other unfortunate victims, the young woman can only regain human form for a few hours each night on the shore of the lake. On one such enchanted evening, Prince Siegfried arrives with the intention to shoot a swan but instead witnesses Odette’s transformation and falls in love with her. She confides in him that only his true love and commitment can break Rothbart’s curse, or else she will remain a swan forever. As the story seems headed for a happy ending, the evil sorcerer and his daughter Odile intervene to test the pair’s true feelings for one final time.

The experienced dancers of Hybernia Theatre masterfully recreate the suspense and drama of Swan Lake. In combination with Tchaikovsky’s beautiful, melodious and intense score, this ballet performance is bound to leave you breathless and keep you on the edge of your seat until its monumental finale.