The Nutcracker – A Christmas Carol, Ballet by Y. Vàmos 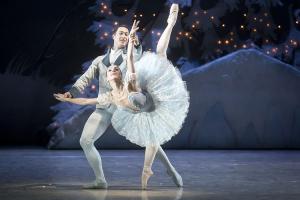 The wonderful thing about ballet is that it never stands still. Whereas opera sometimes suffers from being updated, revised choreographies only seem to breathe new life into the art of dance. That is certainly the case with Youri Vàmos’ interpretation of The Nutcracker. Or, to be more precise, The Nutcracker - A Christmas Carol.

E.T.A. Hoffmann and Alexandre Dumas’ sweet-filled fantasies were the basis of the first Nutcracker ballet in 1892. By merging these stories with Charles Dickens’ classic tale of redemption, A Christmas Carol, Vàmos created an entirely new premise for a work that has become synonymous with the festive season.

Clara is the daughter of Bob Cratchit. He in turn is clerk to Ebenezer Scrooge, a man whose miserly ways have made him come to hate Christmas and everything it represents: friendship, kindness and compassion.

Scrooge fires Cratchit on Christmas Eve (something that even Dickens’ Scrooge isn’t cruel enough to do). As a result, the clerk cannot afford to buy Clara the nutcracker doll she longs for, while Scrooge is left to wrestle with his conscience and the warnings of the ghosts of Christmas past, present and future.

While the story of The Nutcracker - A Christmas Carol is far removed from Marius Petipa and Lev Ivanov’s original concept and choreography, Vàmos’ is every bit as delightful. If anything, it has a stronger and more convincing narrative; adding Dickens to the mix anchors the ballet more firmly in the traditions of the nineteenth century which so strongly influence our own celebrations of Christmas today.

What has not changed is Pyotr Ilyich Tchaikovsky’s wonderful score, snippets of which will be immediately familiar even to those who have not seen a Nutcracker ballet before. More than any other composer, before him or since, the Russian master had an uncanny grasp of the lightness of touch that ballet calls for.

The Nutcracker - A Christmas Carol received its world premiere in Bonn in 1988 and has enchanted audiences wherever it has appeared. Now Prague has the opportunity to enjoy once again a ballet that, whichever version of it you choose, always charms those watching it with its unfailing grace and beauty.