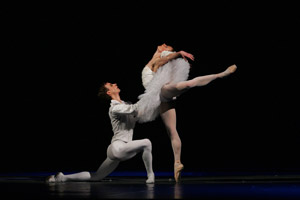 The Nutcracker was the last ballet Piotr Ilyich Tchaikovsky would compose, and it ranks among his best-known works. It has become a particular Christmas favourite, and excerpts from the inspired score, such as the beloved ‘Dance of the Sugar Plum Fairy’, regularly appear in popular culture across the globe. This season, the Hybernia Theatre in Prague stages a wonderful revival with the choreography of Alexander Kysil. With a duration of 105 minutes, intermission included, and not a moment of boredom or inaction, the performance is excellent for both children and adults. Join the fairy tale magic dance!

Tchaikovsky composed The Nutcracker after the success of The Sleeping Beauty in 1890. The libretto was based on The Nutcracker and the Mouse King by German master storyteller E. T. A. Hoffmann. With choreography by the great Marius Petitpa and Lev Ivanov, the premiere at the Imperial Mariinsky Theatre in St Petersburg on 18 December 1892 was set to be a success, but the critics were left cold. The only undoubted praise went to Tchaikovsky’s score, which stood out with precision, richness and innovation. For the performance at Hybernia Theatre, audiences can enjoy a pristine recording of the orchestral parts that supports the talented dancers on stage.

The choreography by Alexander Kysil presents a modern take on the classic ballet and tells the story in a way that engages today’s spectator with style and ease. The plot begins with a family Christmas celebration. At the stroke of 8 o’clock, a famous toymaker arrives at the party and puts on a special show with four of his life-like dancing dolls. He then presents his goddaughter Clara with a tiny wooden nutcracker figure. After everyone has gone to sleep, the little girl wakes up to check on her new toy, but as the clock marks midnight, toys come to life, the quiet house turns into a buzzing battlefield where mice and gingerbread soldiers fight to the death, and nothing is quite like it seemed. Join the wondrous fantastical world of The Nutcracker in Prague this season!