The Sleeping Beauty, Ballet by P. I. Tchaikovsky 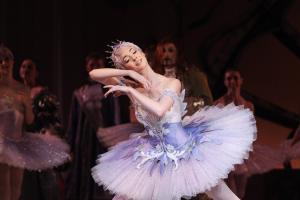 After the lukewarm reception of his first ballet Swan Lake, Piotr Ilyich Tchaikovsky was eager to prove himself in this genre. When a commission for another fairy-tale ballet came from the Imperial Theatres in St Petersburg, the composer did not hesitate to accept it. With a libretto by Ivan Vsevolozhsky and choreography by the ballet master Marius Petipa, The Sleeping Beauty was born. It had its premiere on 15 January 1890 at the Mariinsky Theatre in St Petersburg. The reviews were very positive, but Tchaikovsky sadly would not live to witness the work’s global success. Over a century later, The Sleeping Beauty is still one of the most beloved classical dance performances in the catalogue, as the revival in Prague aptly demonstrates.

Working off the version of the story by Brothers Grimm but also incorporating many secondary characters from Charles Perrault’s narrative, Tchaikovsky and Vsevolozhsky centred their ballet on the clash between good and evil, embodied by the two fairies. This allowed the Russian composer to showcase his talent for crafting memorable character leitmotifs and to incorporate them in different parts of his score. Petipa’s virtuoso choreography complements the music perfectly, making the Lilac Fairy and Carabosse highly coveted parts among professional dancers.

The Prague performance keeps the energy and appeal of the original production, but it also brings in an element of innovation. It features the updated choreography by Marcia Haydée, first shown in 1987 in Stuttgart. The Brazilian prima ballerina’s production combines Petipa’s unique choreographic appeal and technicality with an even more dramatic plot and outstanding costume work. All this combined with Tchaikovsky’s romantic, emotionally charged and timeless score makes The Sleeping Beauty in Prague simply irresistible. The composer’s finest ballet score choreographed by one of the greatest ballet masters of all time and updated by a living legend of dance – as classical performances go, it hardly gets better than that.