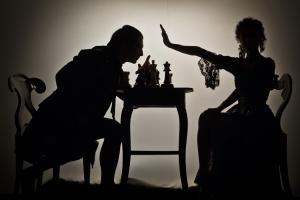 Valmont is a delicious concoction from the Czech choreographer Libor Vaculík. A faithful interpretation of Les Liaisons Dangereuses, Vaculík chose for his ballet the same title that Miloš Forman selected for his filmed version of Choderlos de Laclos’ infamous novel and then beautifully underscored his work with the music of Franz Schubert and the contemporary composer Pēteris Vasks.

The drama begins when the scorned Marquise de Merteuil, seeking revenge on her lover, Gercourt, hatches a scheme with the roguish Vicomte de Valmont to seduce Gercourt’s intended child bride, Cécile. Valmont’s actions set in motion a process which sees almost all the players in the piece destroy each other, a consequence of prizing sexual desire over romantic and even familial love.

Gorgeously dressed in period costume, beautifully staged, and with the motif of a game of chess providing a perfect metaphor for the libidinous machinations of its protagonists, Valmont delights in portraying the empty sensuality of libertine philosophy while the denouement confronts the characters with the consequences of the shallow nature of their many and various intrigues.

Audiences may have read de Laclos’ salacious book of letters or seen Stephen Frears’, Miloš Forman’s or Roger Vadim’s films - all of which are based on the novel - but the medium of dance has a particular power: the capacity to capture the conflicting emotions that arise from mistaking lust for love.

Valmont premiered at Prague’s Estates Theatre on 26 June 2014 and this wonderful venue is once again the home for a production brought to audiences by the outstanding Czech National Ballet.