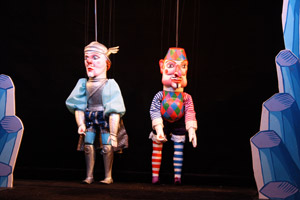 Take a walk down the historic streets of old Prague and you will see just how important a part marionettes have played in the culture of one of Europe’s great cities: shop windows that draw you in to buy your own artisanal handmade puppet; museums that introduce you to the astonishing skills of yesterday’s and today’s great puppet makers; and a theatrical tradition that stretches back across centuries of Czech history.

The first historical records of the Czech cultural phenomenon of puppetry date from the second half of the eighteenth century. So would Wolfgang Amadeus Mozart, who will forever be one of Prague's favourite composers, have been familiar with the artifice of puppet theatre being created by the travelling circuses of old Bohemia? And if he were alive today, what would he have made of his final opera, The Magic Flute, being performed by marionettes in the city where he enjoyed his greatest success?

One suspects that the National Marionette Theatre’s staging of The Magic Flute would have had its composer applauding enthusiastically. First performed on 30 September 1791 at the Theater auf der Wieden in Vienna, The Magic Flute’s fantastic cast of characters could easily have been drawn from the imagination of a supreme puppet master.

Its heroes, Prince Tamino and his companion, the bird-catcher Papageno, are toyed with, first by the Queen of the Night and then by the high priest, Sarastro. Pamina is the daughter of the Queen and, according to her acolytes, a prisoner in Sarastro’s palace. The Prince and Papageno set about rescuing Pamina. However, things are not what they seem. When Sarastro reveals himself to be Pamina’s guardian, the Prince agrees to undertake three challenges to prove himself worthy of the princess. But will Papageno, less adept than Tamino, be found wanting in his own quest to win the hand of his beloved Papagena?

Mozart was a man whose sense of humour was rarely found wanting. Even in an opera that some scholars consider to be a treatise on the merits of rational thought, The Magic Flute, with its fairy-tale setting, is first and foremost, wonderful entertainment that lends itself perfectly to the illusion of puppetry.