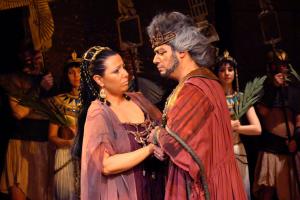 There’s no denying that Aida is an operatic blockbuster, an epic designed to satisfy nineteenth-century curiosity with all things Egyptian. But, thanks to the genius of Giuseppe Verdi, it is far more than just a visual spectacle.

Written to a libretto by Antonio Ghislanzoni based in turn on a scenario crafted by Auguste Mariette, in Aida Verdi created one of opera’s greatest, and most intimate, love triangles. The story is a brilliant depiction of what happens when love for another comes into conflict with love for one’s country.

Egypt and Ethiopia are at war. Aida, a slave in the Egyptian royal household is, in truth, the daughter of the King of Ethiopia. Both she and Amneris, daughter of the Pharaoh, have fallen for Radamès, who commands the Egyptian forces. Radamès loves Aida, but when he defeats the Ethiopians, he is rewarded for his triumph with Amneris’ hand in marriage. As the young captain leads his army in a victory procession, he is unaware that Aida’s father, Amonasro, is amongst his prisoners.

Urged on by Amonasro, Aida gets Radamès to reveal his plan for the invasion of Ethiopia. Their conversation is overheard by Amneris and Radamès is arrested and put on trial for treason. Radamès refuses to defend himself, the only way he feels he can save Aida. He is sentenced to death, but it is Aida who makes the final sacrifice.

Premiered on 24 December 1871 at the Khedivial Opera House in Cairo, and now destined once more for Prague, Aida is vintage Verdi. Notwithstanding its title, Aida has two leading ladies and Verdi took full advantage of the dynamics of the plot, and both characters’ relationships with Radamès, to produce some of his very best music.

“Ritorna vincitor!”, which Aida sings to describe her struggle to reconcile her love for Radamès with her devotion to her father, is matched by the anguish that Amneris expresses in the duet “L'aborrita rivale a me sfuggia...Già i Sacerdoti adunansi”, torn between what she feels for Radamès and her despair at what she sees as his betrayal. In Aida, the soprano and mezzo-soprano roles are like two sides of the same artistic coin that Verdi spins to provide a masterclass in the emotive power of opera.