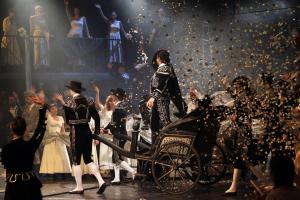 The work, set in Seville, but which premiered at the Opéra-Comique in Paris, is one of the foremost examples of composers of the late 19th century’s growing fascination with the exotic. For audiences of the time, unaccustomed to a piece that places the lower end of society at the centre of the drama, Carmen, and the confident overt sexuality of its central character, clearly had the power to shock.

Essentially a tragedy, Carmen is the tale of a mesmerising woman’s hold over the men she encounters. Rather than being torn between the competing attentions of Don José, an army officer, and Escamillo, a bullfighter, she toys with both of them, ultimately prizing her right to choose her lover more than life itself.

In contrast to its story, Carmen boasts some of the most joyous tunes in the operatic canon, including the famous aria, popularly known as the Toreador Song (“Votre toast, je peux vous le rendre”) and the protagonist’s Habanera, a paean to passion (“L’amour est un oiseau rebelle”).

At pains to ensure the authenticity of the music, Bizet’s faithful interpretation of the sounds and rhythms of southern Spain was perhaps a step too far from the classical tradition that the opera-going public was used to and the work was not well received during its inaugural run in 1875. Bizet, who was only 36 years old when he died three months after Carmen’s premiere, was convinced of the opera’s failure.

Now one of world's most popular operas, Carmen and its glorious music has more than stood the test of time.