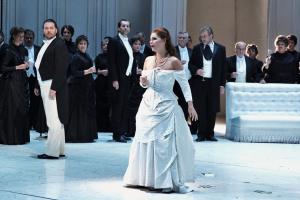 La Traviata is one of the shiniest jewels in the crown of Maestro Giuseppe Verdi. The timelessly attractive and tragic heroine Violetta Valery has captivated generations of opera goers, and her charms are showing no sign of exhaustion. This season’s revival in Prague carries the same electricity that has kept this classic work alive for over a century and a half. Sharp social critique, a tender love story, and a sacrifice in the name of the beloved, all set to Verdi’s memorable melodies – La Traviata is a true gem and a staple in the opera repertoire.

The plot comes from Alexandre Dumas’ La dame aux camelias, itself inspired from the real-life story of the courtesan Marie Duplessis who took Parisian high society by storm with her beauty and wits. Librettist Francesco Maria Piave adapted Dumas’ story for the operatic stage. In it, the gorgeous and intelligent escort Violetta Valery’s cynical views on love and dedication to living in the moment without concern for consequences collide with the naïve romanticism of Alfredo Germont. Their unlikely union sparks love in both their hearts, but life and conservative society soon get in the way. Once callous, selfish and hedonistic, for the first time in her life Violetta faces the choice between herself and another. Her decision, whichever way it goes, is bound to have tragic consequences.

For all the praise that we can shower upon La Traviata, its premiere was anything but a success. On 6 March 1853, Teatro La Fenice in Venice was shaking with the audience’s boos and hisses of discontent. A middle-aged voluptuous soprano had filled the role of the young and fragile Violetta, to almost comical effect. The cast as a whole was underprepared and it had shown. Luckily, Verdi was confident in the quality of his work and persevered. After recasting Violetta, La Traviata became a hit for the centuries. The fantastic revival in Prague this season is just another chapter in the opera’s successful life.