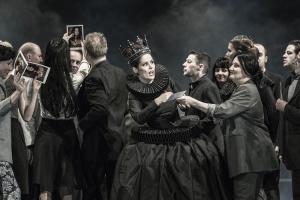 Macbeth desires the Scottish throne, but first he must destroy his rivals. A ruthlessly ambitious wife, a coven of witches, a parade of ghosts and warring armies are the other ingredients in one of the most thrilling dramas ever written.

It’s well known that Giuseppe Verdi was a hard worker, particularly during his so-called galley years. But with Macbeth he took things up to another level altogether. The opportunity to set Shakespeare to music inspired him to invest time and energy in every aspect of his new opera, from the choice and management of its singers and actors right through to how Macbeth should be staged.

There were casualties along the way. Verdi, at one point, even replaced his librettist, Francesco Maria Piave, with the poet, Andrea Maffei, so that he could finalise his vision for Macbeth. The end clearly justified the means. The premiere at the Teatro della Pergola in Florence on 14 March 1847 was a triumph, with Verdi himself called back to receive the applause of an ecstatic audience no less than thirty-eight times.

What they had just seen was close to a revolution. Rather than the story serving to showcase the music, Verdi had created a musical drama, unconcerned with operatic convention. The traditional separation of aria and recitative were overturned; the contribution of Verdi’s ensembles was as important to the composer as that of his soloists.

Shakespeare's tragedy, Macbeth, has three witches; Verdi's opera has eighteen, giving its composer the means to make, if that were possible, the plot of the original play even more intense and exciting. Verdi’s music too consistently surprises the ear. In Macbeth, the orchestral colour is astonishing. Instruments play in unfamiliar registers and, perhaps most thrillingly of all, Lady Macbeth sings in a way no soprano had ever been heard before. With none of the full-blown coloratura that Italian operagoers had become accustomed to, how the role is acted determines how it is sung.

Music lovers in Prague now have the opportunity to experience once again an opera that truly broke the mould. Verdi would scale further heights, but Macbeth easily stands comparison with everything that followed.