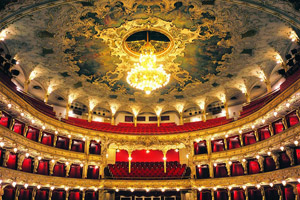 Prague State Opera is hosting the very special New Year’s Eve Gala, a performance, banquet, and dance party combined into one roller-coaster event. Everything begins with a welcome reception featuring cocktails and refreshments to set the mood right. Then it is on to the first half of the operetta Ball at the Savoy by Paul Abraham. The banquet opens during the intermission. Part II follows, after which the banquet continues. After the clock strikes midnight and all guests raise a toast, they can greet the new year with more live music and dancing. This New Year’s Eve Gala checks all the boxes and makes for an unforgettable Prague experience to enjoy on your own or share with loved ones.

The musical performance at the heart of the gala evening originally debuted in German as Ball im Savoy on 23 December 1932 in Berlin’s Großes Schauspielhaus. Paul Abraham wrote the music for the libretto by Alfred Grünwald and Fritz Löhner-Beda. The operetta quickly caught audiences’ attention with its eclectic score, featuring numerous dances like American foxtrot, Argentinian tango, Spanish pasodoble, Berliner jazz, Yiddish klezmer, Hungarian csárdás, and Viennese waltz. Oscar Hammerstein translated the work into English, and this version gained further international fame after its inaugural performance at London’s Drury Lane Theatre on 8 September 1933. Abraham was aiming for a smash hit and deliberately kept his score simple, accessible, and entertaining rather than overly developed in terms of musical ideas or harmonies. The result is a wild ride that spreads its infectious energy – a perfect vehicle for New Year’s fun! Prague Opera House’s performance is in Czech, and subtitles in Czech, English, and German make sure you stay on top of the action.

Ball at the Savoy introduces us to Marquis Aristide de Faublas and his wife Madeleine. They are headed to a splendid ball where each of them will face temptation – the Marquis will meet his old flame Tangolita, an Argentinian dancer, while his better half will seek to make things even by throwing herself at the shy young man Célestin Formant. The Turkish diplomat Mustapha Bey and Madeleine’s American cousin Daisy complete the main cast of characters. Their intrigues and games make Ball at the Savoy a most entertaining operetta that breathes life into the New Year’s Eve Gala at the Prague State Opera.