The Bartered Bride, Opera by B. Smetana 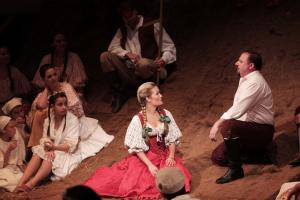 Bedřich Smetana is the founding father of Czech music. Until the mid 1800s, opera was dominated by the output of the German and Italian masters and invariably performed in those languages; Smetana’s breakthrough was to compose works in his native idiom at the same time as his country’s sense of nationhood was beginning to emerge.

The Bartered Bride is perhaps Smetana’s most loved opera and certainly one of his most delightful. At the centre of the drama is the character of Mařenka who is to be married against her wishes to Vašek, the son of a wealthy local landowner. She loves another man, Jeník, but Jeník sadly is penniless. Jeník tricks the matchmaker, Kecal, into paying him to turn Mařenka down, but Jeník later reveals a long-forgotten secret which makes him the rightful person to ask for Mařenka’s hand in marriage.

The Bartered Bride is played to a background of village life with characters that would have been immediately recognisable to Czech audiences when the work was premiered at the Provisional Theatre in 1866, part of the National Theatre, the venue for this production.

While the opera is undeniably folkloric in spirit, Smetana did not incorporate specific folk tunes into the music. His greatest achievement was to interpret the natural rhythm of Czech dance to make the world of the village he was depicting all the more believable.

His role as musical director of The National Theatre coupled with his knowledge of the western musical tradition (Liszt was a close friend whose influence can be clearly felt in Smetana’s symphonic poems) left Smetana supremely well placed to write music both profoundly Czech in character and eminently accessible to international audiences.