The Jacobin, Opera by A. Dvořák 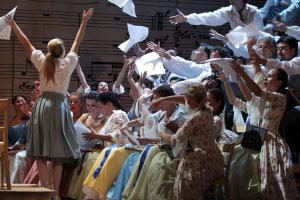 Opera lovers are fortunate that The Jacobin saw the light of day at all. Premiered in Prague at the National Theatre on 12 February 1889 - the very same venue in which audiences will enjoy this presentation - Marie Červinková-Riegrová had already finished writing the libretto and entered it into a competition organised by the Theatre’s founding committee in 1883. Dvořák’s hesitation in writing the music may have been due to a fear that its indigenous setting might not sustain the growing interest in his work abroad.

He need not have worried: The Jacobin became one of Dvořák’s most performed operas, both in his own country and around the world. The story, with elements that echo the biblical prodigal son, together with its universal themes of deception, forgiveness and reconciliation, could not fail to resonate with audiences wherever it was played.

The drama begins when Count Vilém of Harasov disinherits his son Bohuš in favour of Adolf, his nephew. On hearing the news, Bohuš and his wife Julie, who have returned to their home from revolutionary France, go into hiding for fear of being suspected to have Jacobin sympathies. Filip, the burgrave, has designs on Terinka, the local schoolmaster’s daughter. Terinka loves another, Jiří, and Adolf’s scheming nature is revealed when he colludes with Filip to remove Jiří from the scene while at the same time locking up Bohuš.

Fittingly for a work in which Dvořák ensures that the music perfectly partners the story that unfolds, it is the power of song, when Julie sings a lullaby that the count’s late wife used to sing to her son, that convinces Count Vilém of Bohuš’ honesty.

Tweet
image The Jacobin, Opera by A. Dvořák / Národní Divadlo