The Marriage of Figaro, Opera by W. A. Mozart 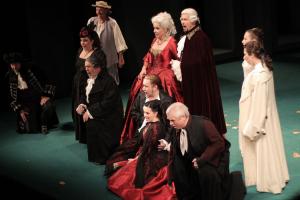 Could there be a more appropriate venue than the Estates Theatre, Prague, for the performance of Mozart’s great comic opera, The Marriage of Figaro?

It was in this theatre that The Marriage of Figaro enjoyed its greatest initial success, in the latter part of 1786. Its premiere in Vienna in the spring of the same year was marred by the catcalls of hecklers, possibly hired by some of Mozart’s jealous rivals for the patronage of the court and, in its initial run, the opera was only performed nine times.

The Marriage of Figaro is a hilarious tale in which the various characters conspire to undermine the claim of the feudal lord, in this case, Count Almaviva, on any woman in his household. The quick-witted Figaro, aided and abetted by his fiancée, Susanna, and the count’s wife, Rosina, ultimately ensure that the count gets his comeuppance, but not before a whole host of schemes, disguises and mistaken identities have enthralled the audience.

Mozart’s visit to Prague in the early months of 1787 sealed the city’s love affair with the composer. In an era when artists were appreciated either as a performer or writer of music, Mozart, in a benefit concert organised on his behalf on 19th January, demonstrated that he was both, improvising variations at the piano on “Non più andrai”, one of the arias from the opera.

As for the music, no less a figure than Johannes Brahms was dumbstruck by Mozart’s achievement saying that the opera attained a level of perfection that would never be equalled. Clearly, the enlightened music-lovers of late 18th century Europe felt much the same way.