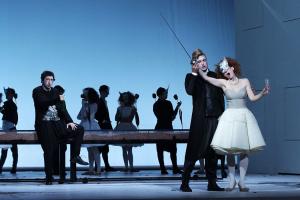 Great music has the power to create a connection between ourselves and the generations that have gone before us. To see and hear Mozart’s great opera Don Giovanni in the Estates Theatre, the venue where it was premiered on 29 October 1787, is like travelling back to a time when the spirit of revolution was all around and Europe was about to change forever.

While there is nothing to like in the character of Don Giovanni, a libertine who seduces and discards his lovers at will, and in one case even kills one of their fathers, one cannot help but marvel at his defiance in the face of death when in the climactic final scene the spirit of the man he has slain returns to condemn him. Just as Mozart places the entire work on a knife’s edge between comedy and tragedy, one can readily imagine late eighteenth century audiences either revelling in or sitting uneasily with the emotions that the free spirit of the eponymous anti-hero unleashes.

Liberated from the usual concerns with regard to subject matter, a consequence of receiving a private commission rather than relying on the patronage of the Emperor, Mozart, in Don Giovanni, was creating his own revolution, not from the viewpoint of a political radical, but that of a musical genius. From an overture set in a minor key through to duets sung by characters expressing different emotions, Mozart overturned the conventions of his time to create a work which can be viewed as expressing the ugly underbelly of the Enlightenment or simply as a musical exercise in exploring why we are drawn to those who have a dark side rather than characters that are innocent and pure. More than two hundred years after it was written, the story of Don Giovanni still resonates with audiences all over the world.