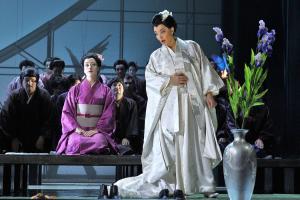 Madama Butterfly is the tale of an innocent young geisha who falls in love with an American sailor. Cio-Cio-San gives up her religion and family to marry Pinkerton, but is then abandoned by him. She keeps faith that one day he will return and be reunited with her and the young son he has yet to meet. However, when he does come back into their lives, it is for a very different purpose.

It is sometimes said that the role of great art is to hold up a mirror to the society it portrays. In opera, Verdi’s La Traviata certainly matches that description as does the deep irony of Mozart’s Don Giovanni. So does Giacomo Puccini’s Madama Butterfly fit into the same category?

The scenario for Madama Butterfly was so far removed from the experience of its first audience that they would have thought that it had very little to do with their own lives. Indeed, when the opera opened at the Teatro alla Scala in Milan on 17 February 1904, Madama Butterfly was booed off the stage. The work that Puccini put into making Madama Butterfly as believable as possible, including his use of Japanese folk music, was initially lost on Italian opera lovers. Puccini however prevailed. Today, Madama Butterfly is adored all over the world.

Delve a little deeper into the libretto and you can see how deftly its authors, Giuseppe Giacosa and Luigi Illica, hint at the tragedy that is to unfold. A casual remark by Pinkerton in the opera’s very first moments, that a marriage contract can be cancelled as easily as the lease on a house, reveal that Cio-Cio-San’s commitment is not shared by her lover.

As Prague theatregoers will discover once again this season, Puccini and his writers had, in fact, created an opera that continues to resonate with us now. We are fascinated by other cultures, but do we truly respect them? Sharpless, the United States consul in Madama Butterfly, attempts time and again to act as Pinkerton’s moral conscience. At its heart, Madama Butterfly is opera at its most human, a lesson in how we should treat other people if we are to be at peace with ourselves.