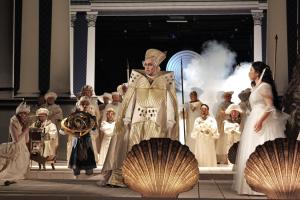 The Magic Flute, given its place in Mozart’s output - it was written only months before the composer’s untimely death - is seen by many as his crowning achievement.

The work is a love story, fairy tale, and an allegory of the triumph of good over evil. The Magic Flute turns on its head our assumptions of the guilt of Sarastro, who we are led to believe has kidnapped rather than rescued Pamina from the deceitful Queen of the Night. Tamino, her suitor, is then set a series of trials by Sarastro to prove that he is worthy of the princess’s hand.

Strictly speaking, The Magic Flute is a German Singspiel rather than Opera seria; a lighter form which combines dialogue and song. In many ways, it is the ancestor of the modern day musical. The libretto was written by Emanuel Schikaneder, an actor who enjoyed something akin to popstar status in his day and it was Schikaneder who played one of the central characters, Papageno, when the work premiered in 1791

Mozart’s genius is on display throughout the piece. The music underpins the core personality of its characters and the narrative thread of the story. Perhaps the best example of the composer’s skill is the way in which he faithfully interweaves the principals’ song in The Magic Flute’s duets while producing so many glorious melodies.

While The Magic Flute was first performed in Austria, Prague audiences and the Estates Theatre in particular, which is the venue for this production, have always had a special relationship with Mozart ever since one of his other great operas, The Marriage of Figaro, was performed in the city.