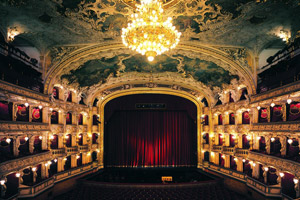 “Here the maestro put down his pen,” conductor Arturo Toscanini reportedly said as he abruptly stopped the orchestra at the premiere of Turandot on 25 April 1926 at the Teatro alla Scala in Milan. Giacomo Puccini had worked tirelessly until his sudden death to complications from throat cancer. Even though he could not finish his ultimate masterpiece, Turandot still shines with the Maestro’s fantastic melodies and keen sense for orchestration, as opera lovers in Prague can ascertain.

After Puccini’s unexpected passing, his student Franco Alfano took the task of completing Act III based on the late composer’s sketches. While the premiere featured Toscanini’s poignant tribute to the late Maestro, subsequent performances included Alfano’s finale. Turandot quickly became a standard in the operatic catalogue and one of Puccini’s seminal works.

With an Italian libretto by Giuseppe Adami and Renato Simoni, based on Carlo Gozzi’s play, Turandot tells the story of a beautiful but cruel Chinese princess of the same name. She takes great joy in putting her suitors through a test: answer her three riddles correctly or die! She finally meets her match in Prince Calaf who is shaken by her cold-heartedness but also enthralled by her radiant beauty.

Despite the pleas of his companions Timur and Liú, the Prince enters Turandot’s challenge and answers her riddles. Dismayed, she reneges on her promise, but Calaf makes a counter-offer: if she can find out his true name by dawn, she can kill him like the others. As the night progresses through several dramatic episodes, Turandot’s icy heart finally melts, and the two are joined together.

Turandot is Puccini’s second opera set in Asia and a prominent departure from his signature verismo style. To enhance the mythical elements of the story, the Maestro skilfully injects Far-Eastern musical motifs into his score, weaving an almost impressionist atmosphere that instantly transports the audience to the faraway land.

The opera also features Puccini’s trademark musical characterisation, best exemplified by outstanding arias like Liú pleading, faithful ‘Signore, ascolta’, Princess Turandot’s bitter ‘In questa reggia’, or Prince Calaf’s glorious, optimistic ‘Nessun dorma’. The latter is the real show-stopper and a strong candidate for the ultimate tenor aria of all time. Its magnificent crescendo is the best parting gift the genius Puccini could leave behind, and it makes Turandot even more special.