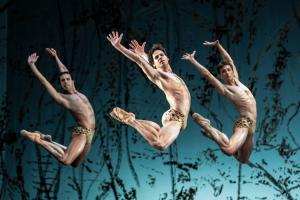 The secret behind the name of the ballet Timeless in Prague is a triple threat of star choreographers whose work spans different styles, periods and schools of dance. Each of the pieces, set to the music of a beloved classical composer, transcends boundaries and breaks new frontiers in the ballet form. Together, the signature works by George Balanchine, Emanuel Gat and Glen Tetley negate the prescriptions of time and honour the dance spectacle’s name: they are, indeed, timeless.

The evening begins with George Balanchine’s ‘Serenade’, one of several performances in which the famous American choreographer expresses his admiration for the music of Piotr Ilyich Tchaikovsky. It is famous in ballet circles for its sophisticated technicality. ‘Serenade’ traces its roots to Balanchine’s strict rehearsal drills. It includes 28 dancers in characteristic blue costumes, performing classical dance routines that are both highly technical and visually appealing.

‘Separate Knots’ by Israeli choreographer Emanuel Gat is second in line. It is an intimate duet that demonstrates the tension and combustibility of a relationship of opposites. The live piano accompaniment that includes the virtuoso pieces of Frederic Chopin raises the stakes even higher. Another intriguing aspect of ‘Separate Knots’ is the fact that Gat switches the dancing partners each night, so that one performance features two female dancers, another – a male and a female, and the next one – two male ones. Each pair’s different energies and sensibilities make every version unique.

Finally, Glen Tetley’s ‘Le sacre du printemps’ (or ‘The Rite of Spring’) reimagines ancient springtime rituals of different peoples around the globe in a raw and physically challenging ballet form. The music of Igor Stravinsky imbues the performance with a special otherworldly quality. A main hero guides the audience through the curious traditions, and the ballet slowly builds up to an ascending grand finale that provides an apt ending to the visually and musically stunning evening.